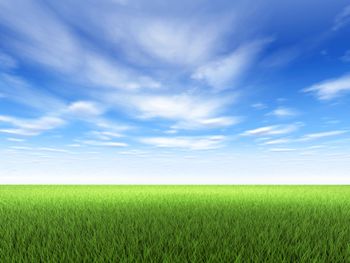 Most of the law school graduates who took the Michigan bar exam in July got good news last week. 61% passed. First-time takers, as usual, fared better -- 71% passed. The breakdown by law school can be found below the fold. While the passers can now get on with the next formidable task, the business of being a lawyer, many others are left to struggle with the need to try again.

The Michigan stats are consistent with nationwide trends -- lower passage rates in a declining pool of bar applicants. According to Bloomberg Business, the average score on the multiple-choice portion is at the lowest level since 1988. The mean score was 139.9, down from 141.5 the year before.

The overall decline in passage rates has been explained by Erica Moeser, the CEO of the National Conference of Bar Examiners, as predictable based on a recent overall decline in the test-taking aptitude of law students as measured by LSAT scores. Moeser's explanation has been sharply criticized within the legal academy. This Legal Whiteboard post is a good representation of the criticism.

Underlying the controversy about whether recent multi-state bar exams have been fair is the larger question of whether the bar admissions process is the right gate-keeping mechanism for assuring essential quality in the provision of legal services. Interest in the question is fueled by a weak labor market  that has given rise to widespread concerns that the market is flooded with law school graduates who have cleared the bar exam hurdle but are unemployed and not "practice-ready." Whatever the actual magnitude of that phenomenon, would brainstorming outside of conventional conceptions and assumptions lead us to a radically different way to assure the public that legal practitioners are qualified for the work? The State Bar's 21st Century Practice Task Force is taking on that challenge.

In a provocative post at 2Civility, Michelle Silverthorn (MLaw '08), Diversity and Education Director at the Illinois Supreme Court Commission on Professionalism, asks the ultimate question: "Should We End the Bar Exam?" Most of us who have survived the bar exam probably react to that suggestion the same way Marines might react to the idea of abolishing boot camp. But Silverthorn's questions should not be ignored:

Which is it? Is the bar exam a protectionist enterprise that overburdens minority and low-income students, or is it a legitimate method of creating minimal standards that protect American consumers?

But more importantly, does the answer even matter? We are now solidly in a world where people are relying more and more on peer reviews and less on professional evaluations. Would it be sufficient to have the “market” decide which lawyers are qualified and which are not? Perhaps we should invest our bar exam resources in creating a robust peer review and disciplinary system. (Peer review alone would be insufficient; in his “consumer protection” response to Mendenhall, Professor Scott Fruehwald cogently explains why.)

Finding the best possible answers to these questions is only part of the puzzle of solving the best legal future challenge. The range of issues being addressed by SBM's 21st Century Practice Task Force can be found here. To both the 61% of July's test-takers we now welcome into our profession, as well as the 39% who must try again, we commit our best effort. 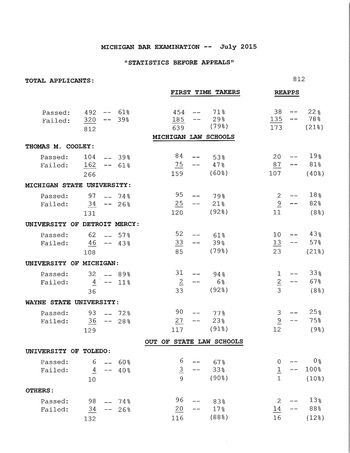 Damn Cooley
way to weigh down the pack!!!!!!

It's not going to Cooley that creates the poor numbers. Their program is extremely solid and many of us passed the July 2015 bar exam with high scores. Cooley is open admissions and gives non-traditional applicants a chance to attend law school. Some of those applicants struggle on the bar exam (which is expected). The majority of the problem with the 39% pass rate was the retakers, not the first-timers. Nobody disputes that our school accepts students who are at a greater risk of failing to achieve success, but it provides them an opportunity where other institutions do not. I had no difficulty passing the July bar exam, and I have nothing bad to say about the education I received from Cooley.

they were given the 100% opportunity to fail

and be in debt

I went to Cooley and am repeating. I don't think we need to hide facts but shouldn't be freaking out like some posters on here either. For me it has more to do with HOW MANY TIMES am I willing to retake it? I know people on their 5th or 6th attempt. I don't know if I can do that. How many times do we go before we just give up?

Looking at the numbers, Cooley still produces more lawyers than any other school.

If Cooley produces the most lawyers, but still has the majority fail the exam and never pass it, HOW is that a "good" thing?

How is that "not" the textbook definition of a Diploma Mill????

-Nothing wrong was said here. If you don't like it, answer the question.